We’re Chick-Fil-A fans at our office. The great service, the clean stores, the nuggets, sandwiches, salads, frosted coffee, cookies; we like it all. We were intrigued to discover via Billboard Insider that the fast-food big-hitter began as a mall-based fast-food chain.

According to Billboard Insider, when the company started opening stand alone stores, they turned to outdoor advertising to maximize their limited advertising budget. They were among the first to capitalize on three-dimensional billboards.

Then one day, an art director saw workers pasting a new billboard ad. He wondered what would happen if they took a break midway through the job…leaving the ad unfinished. The idea kept running from there, with the workers becoming cows and the cows pleading with people to eat more chicken. Sound familiar? 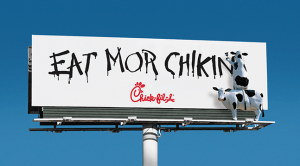 The Chick-Fil-A cows have gone on to make a splash – from their debut at the Houston Astro’s stadium in 2006 to starring in their own calendars. If you’re lucky, you’ll see them mingling with guests at the store, posing for pictures and sitting down at the table with you.

In 2012, Chick-Fil-A became the #1 fast-food chain in terms of sales per store, reaching $3.1 million per location. The next year, they surpassed KFC in sales, despite having a smaller ad budget and closing on Sundays.

We really enjoyed reading this case study, and we take away these lessons:

Compared to TV and radio, billboard advertising is an affordable option

If your first campaign doesn’t take off, don’t be discouraged! Try again until the great “big idea” really takes off

Oh, and make sure you go get some Chick-Fil-A if you were struck with a sudden craving after reading this article.

You can also read about the time we used animals for advertising as well.

Are You Getting the Most Out of Your Billboard Ad?